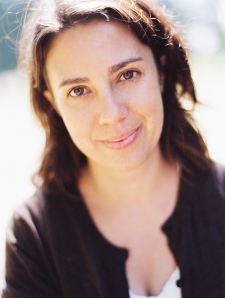 As a mother of four, I marvel at the everyday changes that happen so quickly in childhood. I get to observe the wonder of children experiencing things for the first time. I cheer them on as they learn and achieve. I get to laugh with them as they find joy in the simple things.

Like most parents, I take photographs of important childhood events. But I wanted to do something different. I wanted to look back and remember my children the way they were not only during those happy childhood milestones but also during the day-to-day happenings of life. At the start of 2014, I began a personal project to document my kids throughout the year.

As I contemplated this project, I thought of ways to slow down and really take time to know what was happening in my children’s lives. I thought of my own mother with her camera, carefully composing and changing settings as my brothers and sisters squirmed with the excitement of knowing our photo was being taken. I wanted to re-create that feeling for my children who have grown up in the digital age, where photos are taken at lightning speed, never printed and often deleted as fast as they are taken. I wanted them to feel the importance of knowing that the photos I would take were permanent. I had the tools to make this happen, I just needed to carve out time from our busy days and make this a priority.

I chose film for this project because shooting film causes me to slow down. It forces me to take my time and choose every exposure carefully. I chose KODAK PROFESSIONAL T-MAX 400 film because I have always loved its versatility and beautiful grain. My children seem to notice a difference in the way I shoot with film and the photos I create have more depth and soulfulness.

My project is called “One Roll a Week.” Each week I limit myself to one roll of film and strive to document my children’s lives through timeless portraits that simply focus on their day-to-day growth. Every week, one at a time, I invite my kids into my small studio and take 4 frames of each one. In between frames we talk about their day, friends, or school; no topic is off limits.

January 1st came and everything was set: film, camera and chemicals to develop the film myself. After setting up a stool and studying the light in my small studio, I called my 13-year-old daughter into the room. She eyed my equipment cautiously and asked what was going on. I told her about my project as she plopped down on the stool letting me know that she was not quite convinced this was how she wanted to spend her last moments of winter break. I put the camera up to my eye and studied the scene before me. I was taken aback by how grown up she has become. She sighed impatiently and I snapped the first frame. Lowering the camera, she looked at me in disbelief. I tried my best to explain how I was slowing down; I wanted to spend time with her, documenting her growing up in a meaningful way. Our first conversation of the year started in between those four frames.

After school with my 8-year-old daughter, we talked about the week, her best friend moving away and recess. “The kids at school tell me my hair sticks up. I know it does but I like to think it just looks like I have wings and they help me run faster than all of the boys.”

My 5-year-old son has just completed 100 days of Kindergarten.  I am amazed at how fast time has gone by. It really seems like yesterday I was dropping him off for his first day of school. I asked him how he felt and he excitedly replied, “I am 100 days smarter and I only have 80 more days until summer! Then I can go to college.” 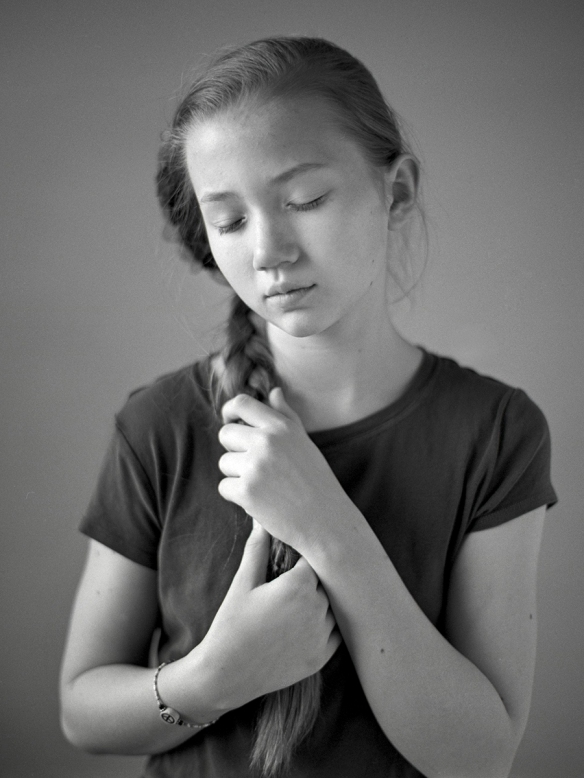 I spent two hours with my 11-year-old daughter at a retina specialist, where they numbed her eyes and tried to dilate them. It was an exhausting process- we got bad news about her progressing vision loss. That afternoon, her eyes were causing her pain and she kept closing them to try to ease the burning sensation. I took her home and we ended up in the studio talking. At one point I sighed, my heart heavy and I asked her, “What are we going to do?” Tugging her hair as she thought she replied quietly, “I just want to be able to keep dancing.” This is one of those weeks I will not likely be forgetting soon. Documenting the year is sometimes harder than I ever imagined.

My five year old has an amazing imagination. One day he is a wilderness explorer, the next a gladiator. “Hey Mom, I’m a gladiator, gladiators are NOT glad. They make mad fighting faces like this.”

As of this week I have completed 17 weeks and it’s been such an adventure. I adore sharing my love of film photography with my children in a way that allows us to spend time with each other. It has really helped me to know them better. Some weeks are easy to document, filled with simple childhood pleasures: being chosen as part of the yearbook staff, dancing in a production or finally getting a 100% on a spelling test. But some weeks are tough. Childhood has its share of disappointments and it can be heart wrenching to experience. I try my best to capture a little of what is going on in their lives, the good and the not so good, knowing that together we are learning and growing together from these events.

Charlene Hardy is a portrait photographer specializing in Children and Family portraiture. She lives in Kennewick, Washington with her husband and four children. Charlene enjoys making timeless portraits of children using film and the hands on approach of developing and scanning the film herself. For more information on her work and her “One Roll a Week” project, please visit http://charlenehardyphotography.com

14 thoughts on “One Roll a Week by Charlene Hardy”