This past April 12-14, more than 50 film-minded professional and amateur photographers converged on the town of Findlay, Ohio to attend the first official mid-west Film Photography Project (FPP) Walking Workshop.  It was a fluid, fun weekend of casual instructions on all formats of traditional photography including 35mm, 120, 4×5 and 8×10, perfectly complemented by Kodak film. 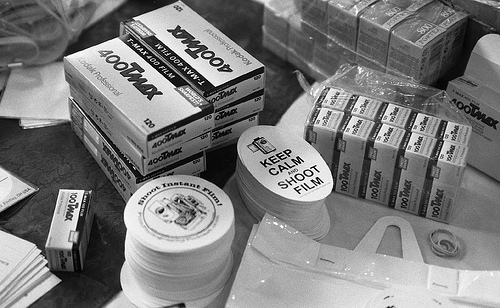 I wanted attendees to use some Kodak films that I shoot.  If you haven’t used it yet, PORTRA 800 is a beautiful addition to the PORTRA 160 and PORTRA 400 line of film. I’ve been shooting PORTRA 800 and wanted to share this experience with our attendees.  And, with so many Film Photography Podcast listeners shooting Kodak Tri-X film, I was thrilled to put rolls of Kodak T-Max 100 and 400 in their hands. The Kodak T-Max BW films are the sharpest BW films on the planet!

The Findley, Ohio FPP Walking Workshop attendees were an amazing, diverse group of men and women of all ages. It was especially awesome to see 30-year Kodak veteran Dale Deven assisting a student on how to load a 35mm Leica camera. Previous FPP meet-ups, held in New York and London, were the inspiration for Findley’s more structured and instructional event – our biggest successes to date.

Why shoot film in a world gone digital, you might ask?  For me, film remains the best and most satisfying medium.  I love the aesthetic, the process…and creating tangible assets I can archive.  I’m so glad that I’m not the only person that feels that way.

In 2009, I launched the Film Photography Project (FPP) as an Internet radio show. With my years of broadcast experience, I thought that a radio show about film would be lots of fun. I had no idea that thousand upon thousands of people who were also as excited about film would be regularly tuning in. The podcast soon became a source of inspiration and discovery for both my listeners and me. Not only was I using medium format and large formats for the first time but those tuning in were also sharing and learning as fast as episodes could be recorded and posted.  My YouTube channel of instructional videos followed shortly thereafter, as did the Film Photography Project website, an online resource for film shooters worldwide.  Now, with the FPP Walking Workshops facilitating instruction and exploration of film with film enthusiasts directly, what better way to spend the weekend than with other film-loving people?

If you’re interested in trying film for the first time, trying a bigger film format or even developing at home, please do visit our podcast archive. E-mail inquiries or questions: Podcast@FilmPhotographyProject.com

Michael Raso is a photographer, producer and filmmaker working professionally in the visual arts for over 20 years; Michael is also the founder of the Film Photography Project and its fortnightly Internet radio show, the Film Photography Podcast. Michael’s goal?…to get as many people as possible to experience the joys of shooting with traditional film!

5 thoughts on “Michael Raso: For the Love of Film – The 2013 FPP Walking Workshop”